Conspiracy theorist believed to be behind cult that believes cannibalistic, Satan-worshipping child molesters control the world is moving to Australia

By Jesse Hyland for Daily Mail Australia and Janon Fisher for Dailymail.Com

A prominent US conspiracy theorist believed to be behind the QAnon movement has been spotted in Australia with evidence he may be staying Down Under.

Ron Watkins is the site administrator of 8kun, formerly known as 8Chan, an internet image board that has become a base for conspiracy theories, the far right, white supremacy and Nazism.

The American, under the anonymous account name “Q”, played a major role in spreading the QAnon conspiracy theory that claims the world is controlled by cannibalistic Satan-worshipping pedophiles on websites 4chan, 8chan and 8kun.

Watkins has also promoted misinformation about Covid-19 and the conspiracy theory that Joe Biden defeated Donald Trump in the 2020 US presidential election due to voter fraud. 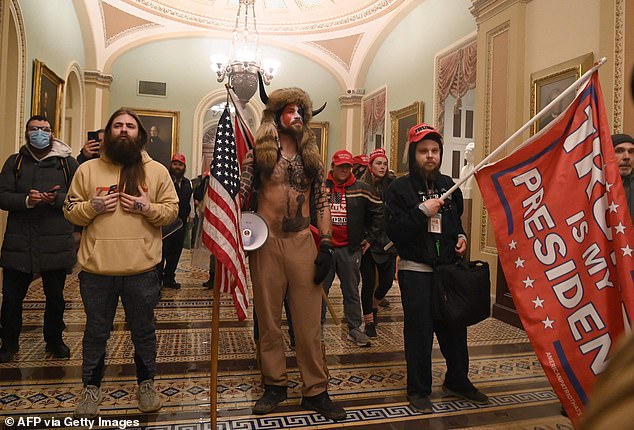 The QAnon conspiracy theory claims that the world is controlled by cannibalistic Satan-worshipping pedophiles. Pictured: Footage from the January 6, 2021, uprising at the US Capitol where many QAnon believers stormed the government building

QAnon Anonymous podcast host Julian Feeld shared a post on his Twitter account on Wednesday, alleging that Watkins was in Sydney and intended to live in Australia.

Feeld, who has spent years researching and debunking conspiracy theories, says he got the information from a source who wished to remain anonymous.

“Ron Watkins was in Sydney, Australia with the apparent intention of moving there on July 26,” he wrote.

The odd coincidence about Watkins being spotted on July 26 was that he was running for the GOP congressional nomination in Arizona.

Watkins came in last out of seven Republican candidates, which was announced a week after his alleged visit to Sydney.

Feeld noted this in his tweet, saying it explained the conspiracy theorist’s “recent absence” from the United States. 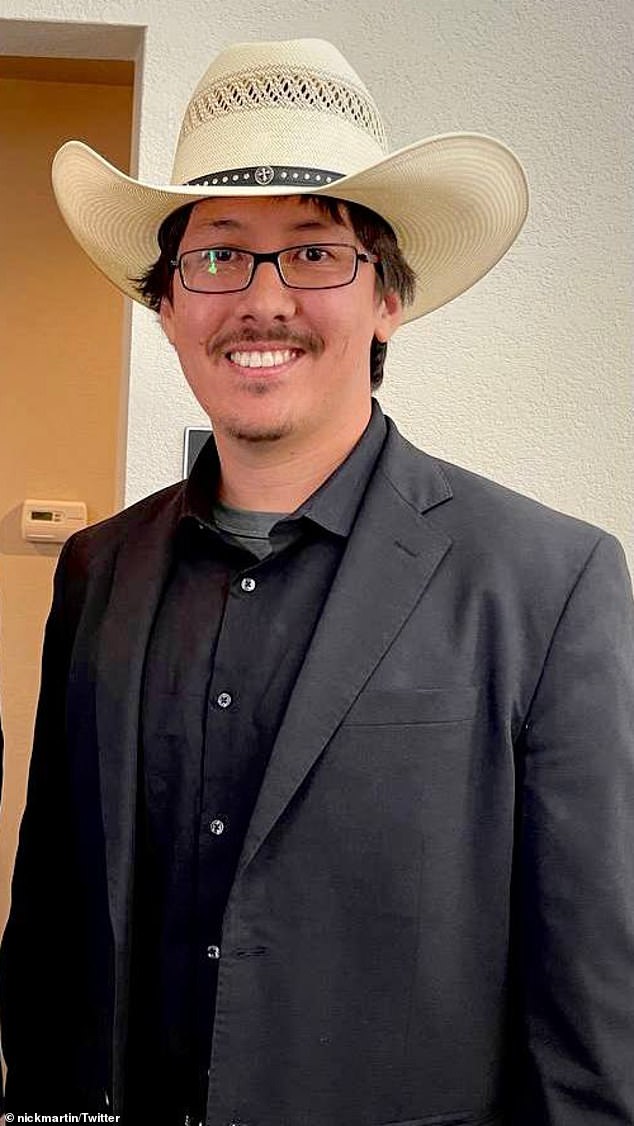 American conspiracy theorist Ron Watkins (pictured) is believed to be behind the QAnon movement. It is claimed he now lives in Australia after traveling from the US

Watkins has previously posted messages on Telegram – an online messaging service with enhanced encryption and privacy settings – complaining about Australia’s response to Covid-19.

He, like many other conspiracy theorists and those with far-right views, has targeted Australian state lockdowns, vaccination mandates and gun laws.

But Feeld added that Watkins had since deleted “several posts referring to Australia” from Telegram after it was reported he was in Sydney.

QAnon started as a fringe group on an internet forum 4chan in 2017, but grew into a global movement that spread wild conspiracies. 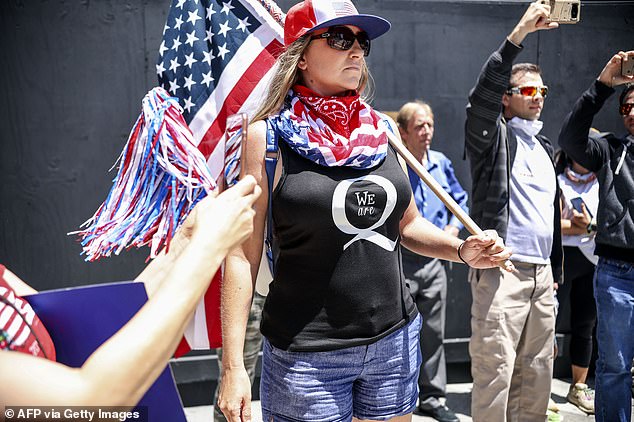 QAnon conspiracy theorist protesters protest during a rally to reopen California and against Stay-At-Home guidelines on May 1, 2020 in San Diego

QAnon supporters were part of the group of insurgents who stormed the United States Capitol on January 6 to prevent the certification of the results of the 2020 presidential election.

In March, followers of the “Q” account promoted the theory that a speech by President Joe Biden on the Russian cybersecurity threat was a call for corporations to shore up a “new world order” with a “shadow government.”

Other QAnon followers believed that John F. Kennedy Jr, who died in a plane crash in 1999, faked his death and would return to lead the country after Donald Trump.

A poll conducted by the Public Religion Research Institute last year found that 15% of all Americans believe in the basic tenets of QAnon.

The FBI called the move a terrorist threat. 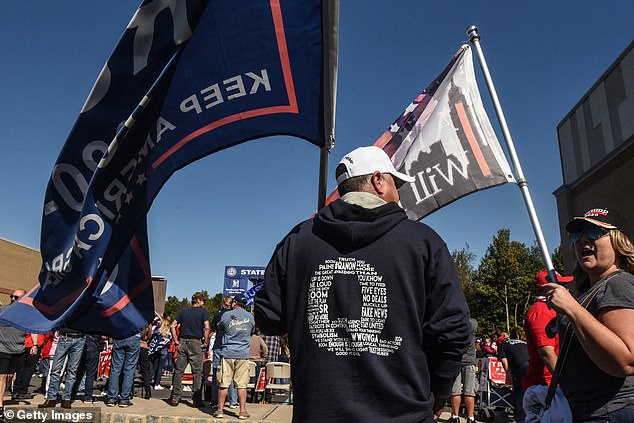 Watkins denied posting under the anonymous “Q” account on internet forums, but supported the QAnon conspiracy theories. Pictured: QAnon believers are seen at a Trump rally in 2020

Origins: Q no started on fringe website 4chan, where a poster calling himself Q left messages claiming to be a senior federal official and claiming to reveal a ‘deep state’ cabal intent on bringing down Donald Trump . Q was born out of the discredited ‘Pizzagate’ conspiracy that saw top Democrats involved in pedophilia and cannibalism out of a Washington D.C. restaurant basement, but quickly gained momentum with ‘Q’ leaving “hints” and claiming that Trump was going to bring down the Deep State. Whenever the conspiracies turn out to be false, followers explain that the inaccuracies are part of Q’s larger plan.

Who is Q? : There may now be multiple people impersonating Q on 4chan’s anonymous forums

A QAnon believer blocked the bridge near the Hoover Dam with a homemade armored tank on behalf of the movement, then pleaded guilty to terrorism

Hoover Dam: In June 2019, 32-year-old Matthew Wright, a QAnon supporter, blocked the bridge near the Hoover Dam in Arizona with a homemade armored vehicle in a 90-minute standoff. He pleaded guilty to terrorism charges and wrote two letters to Donald Trump from prison, which include the signature, which has become QAnon’s motto: “For where we go one, we all go.”

Michael Flynn: Trump’s former national security adviser has become a martyr figure for QAnon believers after agreeing to a plea deal with special counsel Robert Mueller, admitting he lied about his contacts in Russia. QAnon’s conspiracy has Flynn pleading guilty to being a persecuted victim of the Deep State – and some are even claiming he’s “Q”.

Many believers put three star emoticons next to their Twitter handles. But the retired three-star general has denounced any connection to the group and backed out of attending an event after discovering it was organized by a QAnon believer.

QAnon political candidates: Jo Rae Perkins, 64, won the Republican primary in Oregon in May to run for a Senate seat against incumbent Democratic Senator Jeff Merkley. “I support Q and the team,” she said when asked about her interest in the band. She insisted that she went to QAnon’s message boards as a “source of information” and claimed the media focused too much on the group. Perkins won 49% of the vote against three other Republicans.

Marjorie Taylor Greene came in first place in the Republican primary in a dark red Georgia district and was elected to the United States House of Representatives in November 2020. She says she stopped believing in QAnon in 2018, but continues to make controversial statements, and was forced to apologize in June for comparing mask mandates to the Holocaust