I am a strong believer in consumer choice. While I don’t agree with every choice a consumer makes, it is important that they have the right to make informed decisions. However, the problem is that many people miss the “informed” part of the decision-making process.

In today’s world, it’s so easy to get swayed by ads, bad journalism, social media campaigns and a deluge of opinions online. It might not be a big deal when it comes to who makes the best pair of shoes, but it can have pretty drastic effects on the world of food – and it’s rampant in the market. organic.

Cereals and organic products are still only 4% of food sales in the United States., according to the USDA. Although the market for organic products is growing enormously, it has certain limitations. Organic foods are more expensive than conventionally grown foods, which limits their market. One of the ways grocers can combat the higher price of organic products is to import cheaper products from foreign sources.

While most foods sold as “USDA Organic” are grown in the United States, at least half of some organic products – corn, soybeans and coffee – come from overseas, from as many as 100 countries. We are currently buying over $2 billion of certified organic agricultural products every year around the world.

Do “American organic” and “imported organic” products have the same value?

Already in 2014, when University of Oregon professor Peter Laufer wrote Organic: A journalist’s quest to uncover the truth behind food labeling, journalists noted the disconnect between public perception and reality

He was prompted to write the book when he read the labels of two products he had purchased: a can of organic black beans from Bolivia and a bag of organic nuts, which turned out to be rancid, labeled “Product of Kazakhstan “.

“I worked a lot in the former Soviet bloc, and when you look at the ‘corruption meter’, it’s not much worse than Kazakhstan,” he added. he told Dan Charles from NPR. Bolivia, he says, is not much better.

According to the Organic Farmers Agency for Relationship Marketing, an organic cooperative60-70% of agricultural products imported into the United States under the USDA-certified organic brand may be fraudulent.

There are some issues with the origin of the products. Although the United States has certain requirements for imported organic products, we still see many misrepresentations passing through our ports. Imported organic produce and grain must come from a farm that has been certified by an agency recognized by the US National Organic Program with similar requirements from their growers as the United States.

“Many of our imported organic vegetables come from Mexico or Central and South America, noted John Bobbe, Wisconsin farmer, former executive director of OFARM, now retired. “And there are actually several different avenues of fraud in this regard,”

In 2017, the Washington Post gave a presentation in several parts (here, here, here), finding significant fraud not only in consumer products but also in animal feed for the organic industry. His investigation found that 36 million pounds of non-organic soybeans and corn imported from Turkey suddenly got “organic” labels for domestic sale after entering California. According to To post:

According to USDA rules, a company that imports an organic product must verify that it comes from a supplier that has a “USDA Organic” certificate. He must keep receipts and invoices. But he doesn’t need to trace the product back to the farm. Some importers, aware of the possibility of fraud, ask for additional documents. But others don’t.

“The US market is the easiest for potentially fraudulent organic products to enter, as the chances of getting caught here aren’t very high,” Bobbe said. said to the post office. In Europe and Canada, he said, the rules for importing organic products are much stricter. 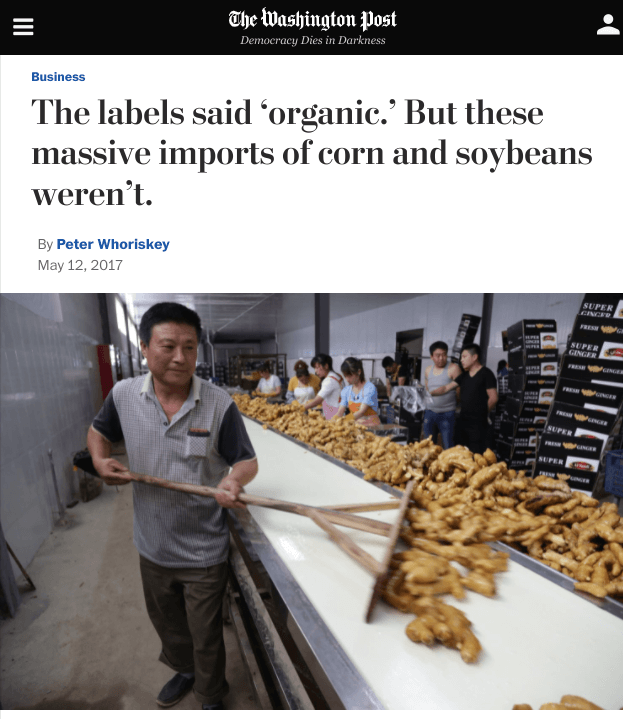 Another issue is the use of synthetic chemicals on organic imports. During the inspection, if organic products are found to contain pests, the supplier has the option of fumigating the container. Yet fumigants are often not on the approved list of biologics.

While imports are an important part of the US food system, they pose unique challenges to consumer confidence. Problems and corruption could arise at every stage of the supply chain for imported organic products, especially with the potential for significant price increases over the same conventional products.

It is impossible to assess the full extent of fraud in imported organic products because there is no incentive for organic companies to monitor foreign suppliers, let alone report it. In addition, monitoring is limited. Certification that imported organic foods meet US standards is not performed by the USDA, but is contracted out to foreign regulatory agencies or third-party organizations authorized by the USDA.

After the To post began reporting the massive fraud, one of the nation’s largest organic inspection agencies, CCOF, issued an opinion stating that he “lacks confidence in the organic status of foreign grains”. The CCOF has announced that it requires all grain shipments to be traced back to producers. In 2018, the the farm bill included measures designed to reduce fraud in organic imports, but their effectiveness is unclear.

So how can we inspire greater confidence in our consumers that what they think they are buying is actually real?

First, we can include more US-grown produce in our grocery stores. When in season, produce grown in the United States should be the first option you see on the shelf. Although corruption and problems can still occur, it has proven to be less likely than imported products.

Second, the USDA and other agencies responsible for enforcing our import regulations and inspecting incoming goods should be held to a higher standard. Negligence or corruption in these agencies should not be acceptable in any format and should be punished accordingly.

Lack of consumer confidence in any food sector affects us all. If consumers believe that they cannot trust the products they buy from stores, it will be a difficult time for all producers, as we are currently seeing with the onslaught of attacks on various agricultural practices and industries.

As producers, we can help spread positive messages about our industry, but more importantly, as consumers ourselves, we can demand that suppliers and regulators play their part of the deal. We rely on the USDA and other organizations to maintain food safety in the United States, and we must hold them accountable if we fail.

Michelle Miller aka “The Farm Babe” is a full-time agriculture advocate. She is a columnist for the GLP and AGDaily. An internationally renowned speaker, writer and online influencer, she is passionate about bridging the gap between farmers and consumers by giving science a greater voice. Michelle resides on a tree farm in North Central Florida. Learn more at www.thefarmbabe.com or on Twitter @theFarmBabe