Traveling through Egypt with Overseas Adventure Travel (OAT) Ancient Egypt and the Nile River Tour took us to all the highlights: Egyptian Museum – check, Step Pyramid – check, Mummy of King Tut – check, Karnak Temple – check, Valley of the Kings – check, Pyramids of Giza — check, the Sphinx — check. Our itinerary roughly matched that of most tours in Egypt.

These 6,000 years of history alone would have made it an amazing journey, impossible to comprehend. But OAT does more. First of all, the organization attaches great importance to the “Learning and Discovery” philosophy, which it takes very seriously. It elevated an already appealing itinerary to a much more immersive travel experience.

Our guide, Hussein, came equipped with a Ph.D. in Egyptology, which made him surprisingly learned. He also had a sense of humor, was very entertaining, and wasn’t afraid to answer controversial questions honestly. “The good, the bad and the ugly” was his mantra. IT WAS Egypt, after all.

OAT encourages the personalization of its own experience. There are always options for things to do during free time, but if tour participants have their own sightseeing ideas, their guides work to make it happen, either in addition to the itinerary or instead of it. Not all travel agencies are so flexible.

And where OAT shines is in encounters outside of the itinerary. As he was walking down one of the streets of Cairo, Hussein randomly approached several young girls sitting on a bench and asked them if they would talk to us. Two wore hijabs, one wore western clothes and two were Copts, the Christian minority in Egypt. This idea alone was significant for all of us.

A heated discussion that focused on their schooling, their free time and the fact that they were not at all interested in marriage ensued. Interestingly, they didn’t want their photos taken, despite the fact that each of them had a cell phone in their hands. You don’t learn these things just by hanging out with your tour mates.

And in addition to an itinerary that covers all the must-see attractions that define a trip to Egypt, OAT also focuses on immersing its guests in a destination’s culture and way of life. “A Day in the Life of a Farming Family” brought us into close contact with a village, its people and their way of life. We spent the day interacting, observing, participating and helping to create a meal using techniques that have been practiced for 5,000 years. Our host said, “If you sit with us, eat with us, talk with us, you’re part of our family.” And indeed, that is what we felt.

A dinner with a Coptic family provided insight into a part of Egyptian society rarely included in a traditional itinerary. We learned of their history in the country and the harm they suffered under the control of the government’s Muslim Brotherhood in 2012. The current government under Abdel Fattah el-Sisi provided them with new protections – although el-Sisi gave him -even is quite controversial because of its abysmal human rights agenda. Again, the good, the bad and the ugly.

And finally, the boat and our journey on the Nile, which I had been anticipating since I first saw it from the balcony of our hotel in Cairo. Blue waters, green fields, yellow mountains beyond – and history everywhere. Once again, OAT wins because it owns the boat – one of the only ones with balconies – and limits its passengers to 75 people on the tour.

Sitting on the terrace, I thought back to just two weeks ago when I stared at a movie screen in awe of the impossibly huge carved stone structures encased in Egyptian pyramids and temples as part of ‘Death on the Nile’. , the most recent film version of the Agatha Christie classic. And now I stared, mouth still open, at the same wonders, but this time from the deck of my own ship on the Nile.

Bus rides, an inevitable part of touring, are more than transportation from place to place with OAT. Hussein maintained a running commentary that captivated us as we traveled. We learned a lot about the Egyptian way of life – political, cultural, personal – as fascinating as the route itself.

Controversial discussions are incorporated into the itinerary. The one-night event focused on the role of women in Egypt – and how it is stuck and changing. This was led by Selma, a young, single worker with a bachelor’s degree in sociology who approached the subject from several angles – from the importance or not of modesty in clothing, from burkas to hijabs and modern clothes; workplace challenges; divorce; faith as a personal choice against the imposition of men; and security issues.

Everywhere we went, Hussein warned us about all the vendors. This is the valley of the vultures, he said, so don’t stop, look in the eyes or look at what they have, no matter the cost. It’s useless junk, and you’ll be caught. Nothing discourages them, so just say no repeatedly and accept that it’s part of the experience.

Needless to say, this won’t be the part of the experience you’ll remember. But 6,000 years of magical history and OAT’s unique presentation of it will stay with you long after the tour is over.

The Nefertiti waits for passengers to embark on the Nile in Egypt. Photo courtesy of Victor Block.

The spice markets in Cairo, Egypt attract visitors with their colors and smells. Photo courtesy of Balonocici/Dreamstime.com. 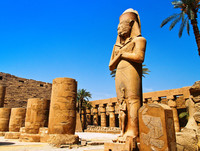 Karnak Temple in Luxor is a must-see for visitors to Egypt. Photo courtesy of Victor Block.

The Nefertiti waits for passengers to embark on the Nile in Egypt. Photo courtesy of Victor Block.