When times get so tough even stalwart Claire Beauchamp Randall Fraser hits the harsh stuff in an attempt to self-medicate, you’re really the wrong way.

And that’s where we pick up with ForeignerThe Season 6 premiere, which spends a lot of time in a flashback to Jamie’s prison days before taking us to Fraser’s Ridge circa 1773. In the past, a grieving Jamie tends to a grieving cellmate from Ardsmuir Prison. In the present, Claire is going through a difficult time following the rape and trauma she survived at the end of Season 5…and Jamie deals with a painful former cellmate in Ardsmuir prison.

And before the oversized episode ends, we get a boost, some love for Claire-Jamie, and confirmation that the show is going to a dark place for Fergus and Marsali this season. Read on for “Echoes” highlights, then be sure to check out what Caitriona Balfe and Sam Heughan had to say about the episode’s unsettling ending.

MEET TOM CHRISTIE | Didn’t think Ardsmuir could get any less fun, but we relive Jamie’s time there from 1753, when there’s neither Lord John Gray nor Murtagh. Gray did not take over as governor of the settlement until 1755 (when Ardsmuir’s scenes in Season 3’s “All Debts Paid” take place); It’s less clear when Murtagh arrived, but it’s also possible that he was on the scene but too ill at the time of this flashback to be outside with the men while they work.

Anyway, this whole section goes on for a looooong time, but the basics are: Tom Christie is a holier than you protestant Christian who doesn’t get along with most of the other (Catholic) prisoners but shares a kinship with the prison governor because they are both Freemasons. During a forced labor session, one day, a fight broke out between the Protestant prisoners and the Catholic prisoners; Jamie mostly stays out of it, only rushing in at the end when one of the men takes a heavy rock to the head and dies. An elderly prisoner puts a piece of tartan – which at that time was forbidden – on the dead man’s body; in order to protect the man, Jamie lies and says the piece of cloth is his.

For this it is stripped – oh, hello healed back prosthesis! I haven’t seen you for ages! – and whipped in front of everyone. As the punishment unfolds, Jamie imagines he sees Claire walking towards him, dressed in white. But before she could say, “Damn baby, what did you do to your hair? the torture is over and the sassenach disappears.

The Governor calls Jamie for a meeting, asks him why he won’t do what he was told. MacDubh replies that the men are divided. They need food, medicine and some peace – and Jamie has a plan to make it happen. He asks the Governor to make him a Freemason too; all it takes is for the Masons to believe in a Supreme Being “like me”, Jamie assures him.

So when Jamie returns to the cell, he announces that “Henceforth the prison will be a lodge and we will be freemasons, united in the belief of the Grand Architect of the Universe.” It’s not an instant fix – Tom Christie and his allies aren’t signing up immediately – but it’s a start.

ETHER? I KNOW IT LITTLE! | Then we move on to 1773 and Fraser’s Ridge, where Tom and a group of Scottish fishermen have just arrived. Is this a good time to tell you that while reading the books I always imagined Tom Christie looking more like the Reverend Johnson of Dr. Quinn, Medicine Woman, and I’m having trouble reconciling that now? Uh, that’ll pass.

Let’s talk about life on the ridge first. Jamie finds Claire passed out on the bed during her operation, and it takes a lot of effort to wake her up. But when he does, she’s excited: she dosed herself with the ether she made, and the anesthetic seems to have worked! (He’s less impressed.) They quickly run through all the atrocities that might befall them in the near future: the Browns, the war, the vigilante group calling themselves a security committee. Also, the British still want Jamie to be an Indian agent for the Crown, a job he really doesn’t want and is considering turning down.

On the wagon ride to Fergus and Marsali’s house, they talk about how Jamie may have been a bit high since Claire’s kidnapping and rape. But the conversation doesn’t get far before they arrive so Claire can examine her heavily pregnant stepdaughter. Marsali is exhausted and she has a bruise that looks like a fist mark on her wrist. When Claire mentions that Fergus should help around the house and take care of the kids, Marsali looks like a squirrel.

Much later, we see Fergus showing up drunk at a family event. When Marsali pulls him aside and they talk about how he drinks too much, he responds, “I’m sorry, I’m such a disappointment.” Oh book readers, it sure looks like they’ll the this season, right? 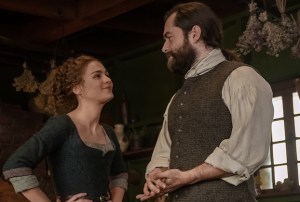 BREATH FROM THE PAST | While Claire and Jamie are gone, Tom approaches the house, and Brianna and Roger invite him over. He’s here because he heard about Jamie offering land to his Ardsmuir men, and he and his group need a place to live. It quickly becomes clear that Tom acquired no thrill, religiously speaking, in the years that followed. And when he and she return, Jamie has to give her a smile to greet Tom. Then Roger says “PSST, I TOLD HIM HE COULD STAY”, and the smile slips a little.

That night, at bedtime, Claire wonders if the Ridge is the best place for Tom to settle down. Jamie admits he’s not excited about it, but what can you do? He remembers that Tom’s wife died while they were in prison; the memory makes Jamie think of how, during their decades apart, Claire would appear to him when he needed her most. “Sometimes I think you’re an angel,” he said softly. “Would an angel do that?” she wonders as she climbs on top of him. Guys and girls, we’re only 45 minutes into the new season, and they’re already playing bagpipes to each other! On a related note: I know they probably shot the scene seated in order to hide Caitriona Balfe’s then-pregnant belly, but GOD BLESS Jamie and her 50-year-old back. With everything he’s been through, you know that thing must creak like the hull of a wooden boat, and lying down would probably have been a better idea, but you’ll hear him complain! 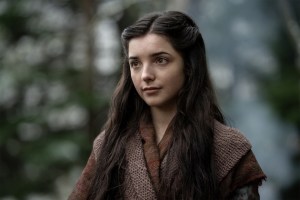 DIFFERENT SCRATCH PROBLEMS | Tom has a daughter, Malva, and a son, Allan. Malva is bright and intrigued by Claire’s work. Allan is… just a little weird. I’m not going to lie to you: this episode felt like it was six hours long, so I’m going to condense a lot here, cool? Among the fishermen there is a woman named Amy who has two children and no husband, and when Roger volunteers to help her build a cabin for his new family, she is defeated… While Claire sews a cuts into one of Tom’s hands, she notices that the other has Dupuytren’s disease, a painful and debilitating condition that she can cure with surgery. But he won’t let her…

This brings us to Richard Brown, brother of the man who kidnapped and raped Claire. Richard is the head of a security committee that seeks to attract Native Americans to the area. And, ironically, he was offered the role of Indian agent which Jamie passed on. Brown and his men ride up to the big house while the Frasers throw a welcome party for the Christies and their group. Richard announces that they are there for Allan Christie, who he believes stole a powder horn. And, uh, he did. 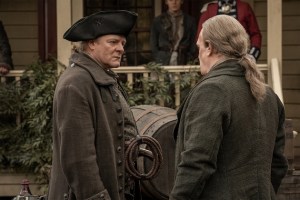 “Do you want to end up like your mother?” Tom yells at his son in front of everyone, roughly grabbing him. “Good, because she’s burning in the fires of Hell!” Tom asks Brown not to take the young man, saying he will punish Allan for his crime. Jamie intervenes and explains very clearly that hell inflict the punishment. “My land, my means,” he says. So he leads Allan to the side, makes him take off his jacket, then whips him with his belt while everyone watches and Allan cries out in pain. Then, Jamie orders Brown to leave, and he does – but not before hinting that Jamie is harboring a rebel on his property. Tom is everything, “We are loyal to our king!” and SHUT UP, TOM

Given this reminder of Richard Brown’s cruelty, Jamie finds Major MacDonald and says he will step in and be the Indian Agent – if only to stop Brown from doing so. And then Jamie finds Tom and brings home a point: “If you have to stay, then my word to Fraser’s Ridge is law.”

DOCTOR, STEEL YOURSELF | That night, as Brown disturbs her, Claire has a nightmare that wakes her and Jamie. She rebuffs his attempts to comfort her, telling her she’ll go downstairs and make a cup of tea instead. But she actually turns on the ether still in her cabinet, puts a few drops of medicine in the mask. Then she sits up on the bed and takes a deep breath, falling back into a stupor. Uh-oh, are we in a Rules of the cider house status here?

Now it’s your turn. What did you think of the episode? Grade the premiere via the poll below, then hit the comments with your thoughts!