URUMQI, Dec. 13 (Xinhua) – Dressed in a white lab coat and plastic gloves, Yulidus Abulimit carefully checked the condition of a collection of tomes. From those crumpled yellow pages, it’s not hard to tell that some of the books are older than any living human.

It is his daily work routine at the Ancient Books Bureau of the Ethnic Affairs Commission of Northwest China’s Xinjiang Uyghur Autonomous Region. The office has collected over 2,000 ancient copies of Islamic classics in Arabic, Persian and other languages.

“This manuscript dates back to the end of the 19th century,” said Yulidus Abulimit holding a copy of the Quran. “The paper is Hotan mulberry bark and the cover is cowhide.”

She then showed the oldest book in their current collection – a 230-year-old “Biography of the Prophet” which has been included in the China National Rare Book Catalog.

Xinjiang has made great efforts to conserve and protect religious texts, with special government funds allocated. In 1983, a steering group was set up in the region for the collection, collation and publication of old books of ethnic minorities.

Yulidus Abulimit said that central and regional governments have attached great importance to their work over the years. “We have organized more than 200 experts and academics to collect, sort and restore ancient religious books during more than 60 trips through Xinjiang,” she added.

A special constant temperature and humidity library has been built in Urumqi for the preservation of fragile and valuable religious books, and an initiative to digitize ancient religious books has also been launched to make them more accessible.

Substantial support has been provided for the formation of young religious in the region. A group of high caliber Islamic clerics has been formed to ensure that Islam is practiced and exercised in a healthy and orderly manner.

Subatjan Semi, 22, dreams of becoming an imam, just like his grandfather. In 2019, he graduated from high school and was admitted to the Xinjiang Islamic Institute, which is considered the best Islamic school in the region.

Subatjan Semi takes a variety of courses including Quran Reading, Religious Affairs, Basic Arabic, Mandarin, History and Culture. “There are Uighur, Kyrgyz and Kazakh students in our class. Teachers and students get along well, ”he said. 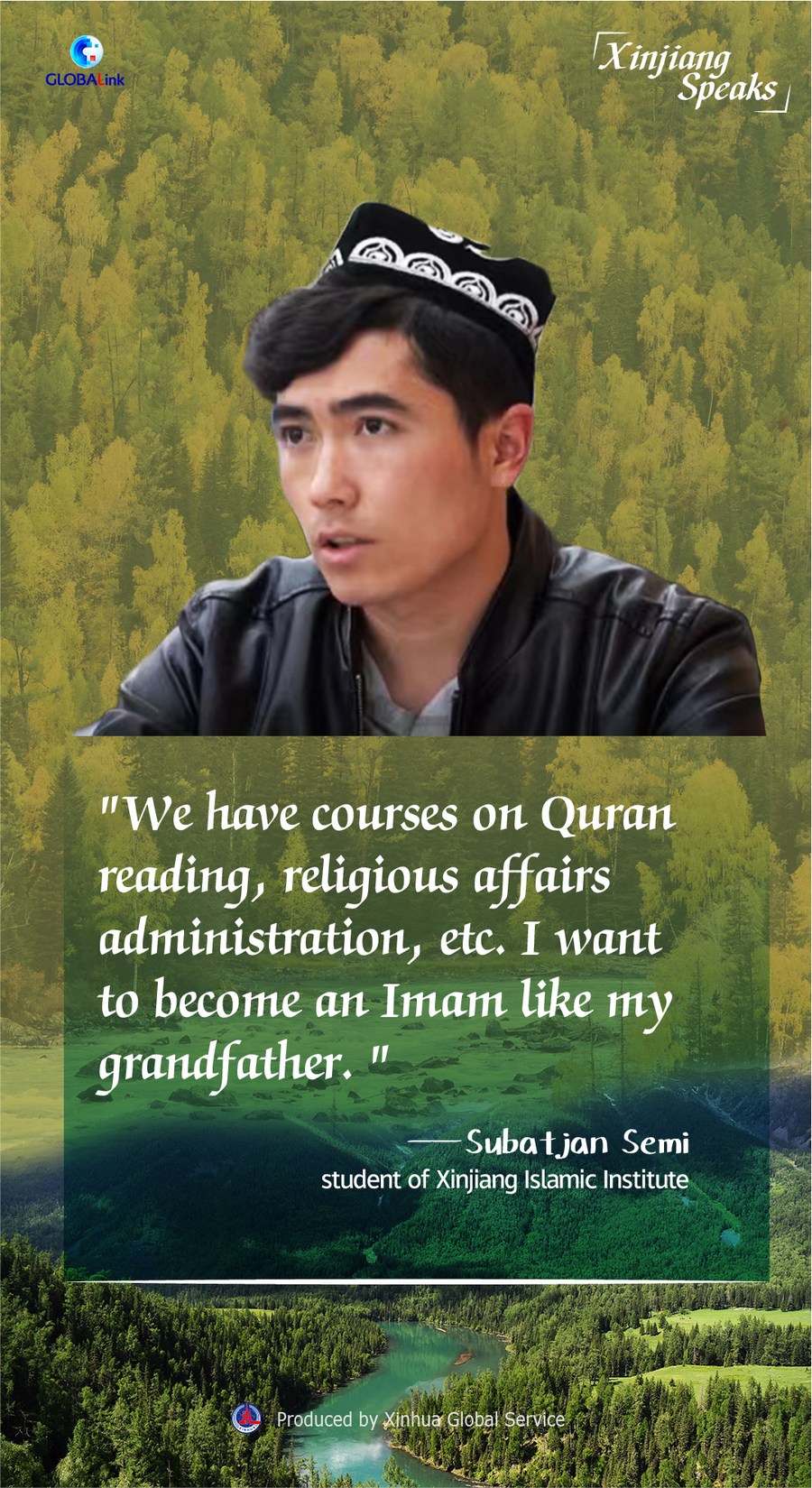 Covering an area of ​​over 10 hectares, the institute has a library, gymnasium, prayer room and bathroom where students and teachers perform wudu before prayers. Hot water is provided year round.

According to Kamaldin Ahmat, associate professor at the institute, the institute currently has more than 1,100 students, and new students enroll every year.

In 2021, more than 160 high school graduates from across Xinjiang were admitted. After graduation, they are expected to become religiously accomplished and morally responsible clerics, Kamaldin Ahmat said, adding that students pray daily and listen to Waez’s speeches on Fridays.

Similar scenes are taking place in mosques in the region, as freedom of religious belief is guaranteed by law, said Abdurekhip Tumniyaz, director of the Xinjiang Islamic Institute. 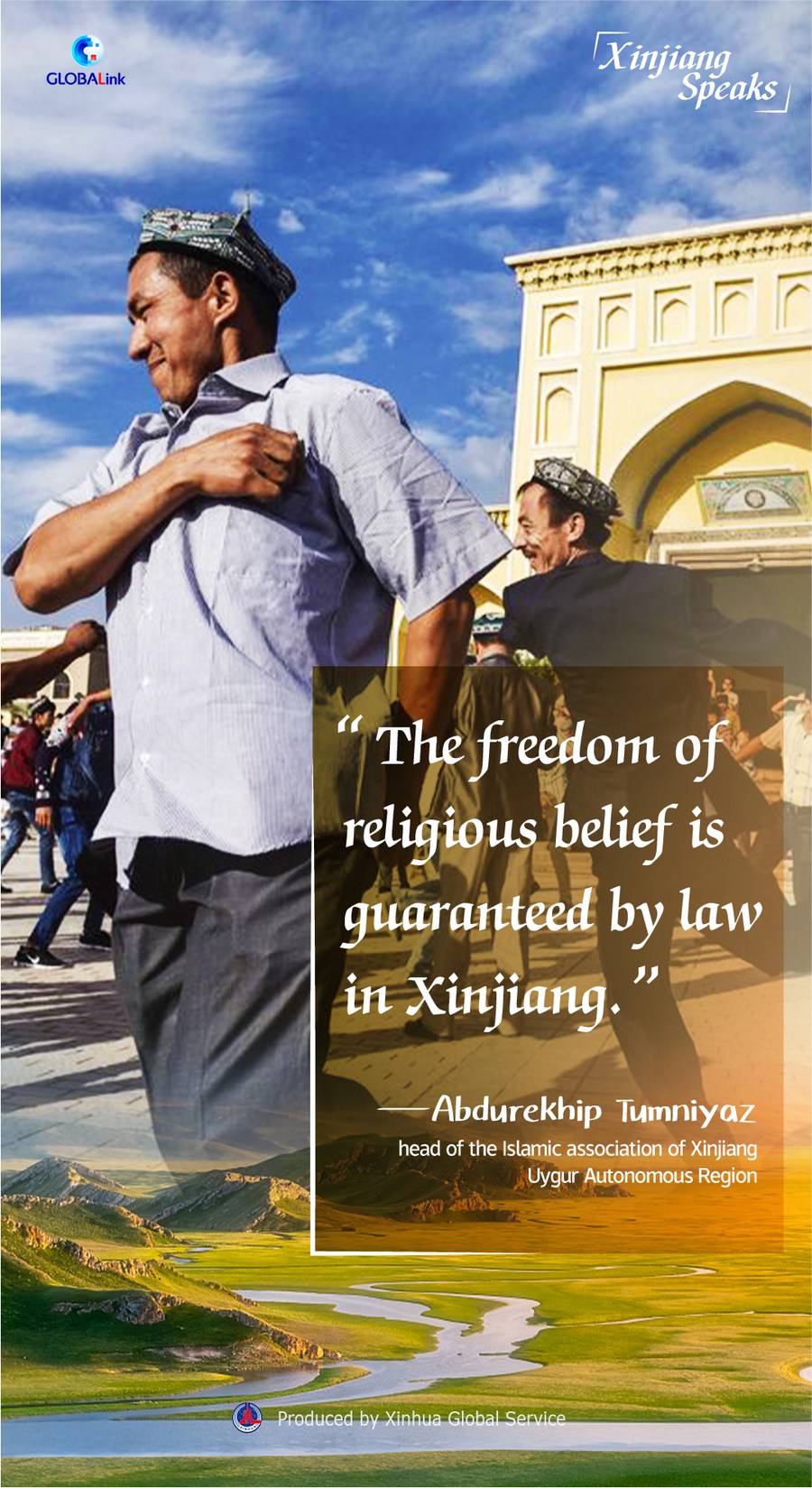 As more and more people in Xinjiang are employed nowadays, some of them choose to offer prayers at home and there are not as many young people in mosques as before. “But fewer people go to the mosque does not mean less freedom of religious belief,” said Abdurekhip Tumniyaz

“It is a good thing that people have jobs and lead their own way of life. They can pray at home like in a mosque. It is protected by law,” he added.