Despite being one of cinema’s most influential works, I’m not a fan of “The Godfather” – purely for personal reasons, understand. I never questioned its essentialness, and I certainly appreciate the groundbreaking cinematic touches that Francis Ford Coppola uses to bring the Corleone saga to life. Even so, it has never been one of my central pleasures, which I cannot live without.

“The Offer,” which confuses a stripped-down origin story with botched whale butchering, doesn’t fundamentally change that. However, it deserves credit for raising my overall esteem for “The Godfather” in one respect: At no point in all of my viewings of Coppola’s epic did I ever shout at random intervals, “OH MY GOD, WHO IS FAULT?”

Feeling something for Michael Corleone, Kay Adams, and the rest of the main cast in Mario Puzo’s story is never a problem. But it’s surprising that “The Offer” series creator Michael Tolkin overlooks this very important aspect of this story, perhaps assuming that famous people playing legendary producers provide enough gravitational pull to keep viewers interested.

RELATED: The fierce cast of “The Godfather”

That could indeed be true for the most hardened fans of “The Godfather” and experts in Hollywood matters. Want to see a modern-day actress play Ali MacGraw? Have it. (If you just wondered, “Who is Ali MacGraw?”, then stop reading and move on; it’s your grandfather’s jawbone, not yours.)

But it tests the average person’s fascination with the film industry and its history by forgetting Hollywood’s raison d’être – which is to generate entertainment.

Series creator Michael Tolkin has a strong background in the fictional Tinseltown threads; he adapted the screenplay for “The Player” from his own 1988 novel.Patrick Gallo as Mario Puzo and Dan Fogler as Francis Ford Coppola in “The Offer” (Nicole Wilder/Paramount+)

Theoretically, that makes him the perfect choice to get into the mentality of “The Godfather” author Mario Puzo (Patrick Gallo), as well as Coppola (Dan Fogler) and all the other personalities connected with the story. But why do that when we can see the film’s making-of story from the perspective of producer Albert S. Ruddy (Miles Teller), a guy who made the leap from the dissatisfied Rand Corporation drone to become the original idea behind “Hogan’s Heroes”?

It can be helpful to ride with unsung and lesser-known people involved in a famed true story, of course. Their first-hand accounts have a measure of “they were there” plausibility, which has the added effect of lending an air of veracity to all the narrative embellishments the writers have thrown into the sauce.

This mainly works when the unrecognized subject understands that people aren’t necessarily listening to see it. If their role is to be a witness and a guide for the audience, they stand aside and let the oversized characters drive the narrative. If the production intends to persuade us that we know them better, then it should be written to hold our attention.

If the intention is to examine the perpetual tension between art and commerce – as the author of Gallo does at the top of the premiere when he is broke and laments, “Hacks sell books. They can pay for their kids’ education,” to which his impatient wife replies, “F**k art, Mario. Start typing!” – this is your first example of the intelligence with which it is played.

It tests the average person’s fascination with the film industry and its history by forgetting Hollywood’s raison d’être – which is to generate entertainment.

But Tolkin and showrunner Nikki Toscano don’t sculpt Ruddy enough to serve as the centerpiece of the story beyond a few too many passages that explain the importance of a producer instead of proving it. And Teller, whose abilities are showcased in better bits, doesn’t justify the story’s focus on his producer.

So when Ruddy lands a production deal with production giant Robert Evans (Matthew Goode) and sets out to produce a bestselling novel, Paramount opted for the crowd we’re meant to go with. That may have happened, but it’s not necessarily worth looking at this career stage and many others.

Still, it’s Ruddy’s take on the game-changer, and since we already know “The Godfather” will surpass box office smash status, that makes Ruddy the staunch, determined visionary who never isn’t afraid to lock horns with Evans, who insists gangster movies are dead.

Once Evans arrives, mostly in a play to keep his job, the two unite against the dodgy executives of Paramount business owners Gulf + Western, played by Colin Hanks (who plays Barry Lapidus) and Burn Gorman (played by Charles Bluhdorn).

And when I say executives clashing with artists, I mean on every detail. Some sequences dramatize widely known traditions, like the fact that the studio wasn’t so hot on Coppola and didn’t want Al Pacino or Marlo Brando.

From the moment the series opens with the millionth shot of establishing the San Gennaro party in Little Italy, and some moron orders an underling…to “leave the cannoli,” you know this thing to them is in trouble.

Simultaneously, Ruddy was forced to placate the actual crowd, who were already unhappy with Puzo, viewing his mainstream success as an insult and a risk. Once Ruddy gets New York crime family boss Joe Colombo (Giovanni Ribisi), everything is… . not exactly copacetic. However, it works with precision and stereotype in the way one would expect from any mafia-adjacent business.

In other words, much of the plot progresses over a series of threats, interrupted by a gunfight here and there. Ruddy navigates threats from studio bosses and law enforcement. To mix things up a bit, sometimes gangsters threaten studio bosses. When that doesn’t happen, the guys at Gulf + Western threaten to pull the plug at various times when Coppola makes creative choices they don’t agree with.

When tackling a story whose ending is already established and universally known, you better have a stellar script and a perfect performance. But from the moment the series opens with the millionth shot of establishing the San Gennaro party in Little Italy, and some moron orders an underling passing a pastry table to “let the cannoli”, you know that thing of theirs is in trouble.

Want a daily recap of all the news and commentary Salon has to offer? Subscribe to our morning newsletter, Crash Course.

From there, we’re accosted with an array of faces wearing the skins of Hollywood legends like rented tuxedos, and a slew of jaw-dropping gangster conversations that could charitably be described as a few degrees south of the base, with Ribisi standing out by appearing to portray the most surly turtle in the mafia.

Teller…against all odds works the hell out of a hairstyle that’s an inch or two shy of a Mike Brady perm-a-fro.

Every heterodox work of art worth celebrating is attached to a fable that involves overcoming hindsight, a lack of faith, and many other unforeseen difficulties. With the right presentation, they can increase our regard for the movies we love or, failing that, enjoy (in a whole new way!). 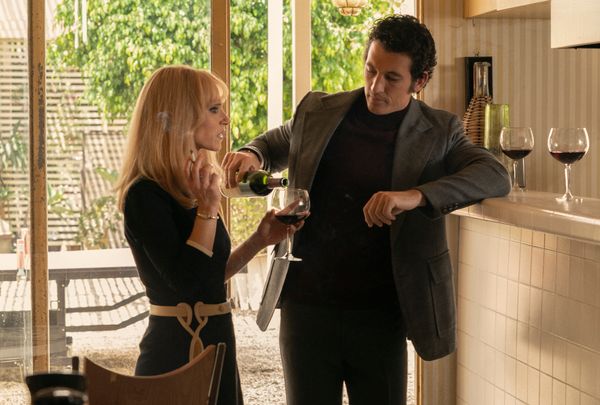 Juno Temple as Bettye McCartt and Miles Teller as Al Ruddy in “The Offer” (Nicole Wilder/Paramount+)“The Offer” seems to have the resources to play this role; the sets are amazing, the costumes are enticing, and all things considered, everyone and everything about it looks awesome – including Teller, who against all odds is working the hell out of a hairdo an inch or two away. a perm from Mike Brady’s.

Juno Temple delivers a burst of joy as Bettye McCartt, Ruddy’s trusted right hand and a ’70s replacement for Rosalind Russell. But seeing her in this amateurishly arranged cock-up has only made me yearn for her release into friendlier, more natural habitats that make better use of her talent.

I think your time would be better spent watching “The Godfather III” three times in a row than watching “The Offer” in its entirety.

I guess we’re meant to appreciate the similarities between Hollywood’s corrupt system and that of organized crime. However – going back to the chorus that colored most of my 10+ hour viewing order – and at some point, you can help but wonder, who cares?

By the way, you read that right. For the most part, each episode clocks in at around an hour, with the brain-soothing finale pushing its luck to nearly 64 minutes. Now, 64 minutes doesn’t come close to the two-hour, 42-minute runtime of “The Godfather III.” However, I think your time would be better spent watching “The Godfather III” three times in a row than watching “The Offer” in its entirety. I don’t like that movie either, but I appreciate its place in Coppola’s trilogy enough to understand exactly what that opinion implies.

The first three episodes of “The Offer” are available to stream on Paramount+ starting April 28. New episodes debut on Thursdays. Watch a trailer, via YouTube.