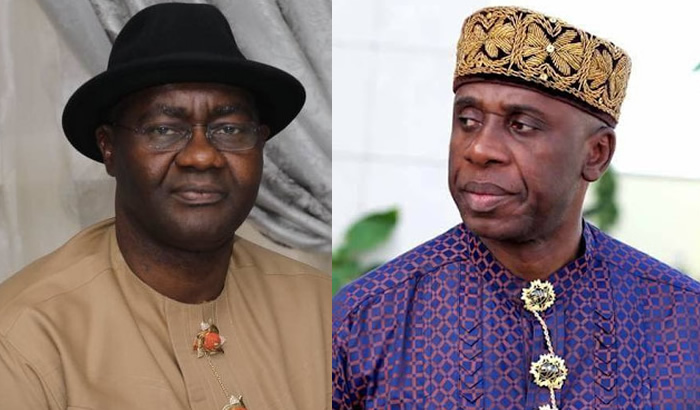 Amaechi and Abe’s loyalists differ over reconciliation at Rivers APC

Members of the Rivers State Chapter of the All Progressives Congress loyal to Transport Minister Rotimi Amaechi; and supporters of the party faction led by Senator Magnus Abe, have accused each other of threatening to destabilize the party.

APC Secretary of State for Publicity Ogbonna Nwuke, who is an ally of the minister, said in a statement in Port Harcourt on Wednesday: “As we speak, we have come across credible reports that allies of Governor Wike and Senator Magnus Abe have lined up new cases that are being filed by different people right now. ”

He added: “We have also learned that some members of a judicial network which has been used several times in the past to render objectionable decisions are to be used as vacation judges.

“The plan is to get injunctions by any means possible; injunctions to stop the APC, which by the grace of God and the leadership of Rt. Hon Rotimi Amaechi, Minister of Transport, is emerging as the dominant party of the Rivers people. ”

In response, a former member of the National Assembly who is an ally of Senator Abe, Golden Chioma, said: “To be fair to you, Ogbonna Nwuke is very aware that he is lying. Senator Magnus Abe at well-orchestrated public events had told everyone he was not interested in a legal solution. On the contrary, he would exploit a political solution to the party crisis.

“It is also a known fact that Senator Abe’s group would bend over backwards to show good faith in the party’s reconciliation.

“We have done everything humanly possible to reconcile, but the other side is doomed to acquisition or conquest, but to peace.

“It’s unfair for human understanding. Every man is born with the inalienable right to express himself or to seek justice.

“Even if he is your slave, there is a way to rule your slave, he will start to oppose it. Even when you own a bull and use it to plow your field, when you plow too much with the bull. bull, he will stop.

The Limpopo woman gives it next with feminine hygiene essentials