BATON ROUGE — Court battles sparked by the June 24 Supreme Court ruling striking down abortion rights unfolded in multiple states on Monday, with a West Virginia judge blocking that state’s abortion ban for 150 years and one in Louisiana leaving an order against enforcement of that state’s ban in place for the time being.

In another Monday development, the Supreme Court issued an order that brings Indiana one step closer to enforcing a parental notification law involving girls who have abortions before they turn 18.

In West Virginia, Kanawha County Circuit Court Judge Tera L. Salango granted the West Virginia Women’s Health Center a preliminary injunction against the 1800s ban, saying that in l Without court action, the clinic and its patients, “particularly those impregnated as a result of rape or incest, suffer irreparable harm.”

Attorney General Patrick Morrisey denounced the decision, calling it “a dark day for West Virginia.” He said his office would appeal the decision to the state Supreme Court.

Lawyers for the Women’s Health Center argued that the 19th century law is void because it has not been enforced for more than 50 years and has been superseded by a host of modern laws regulating abortion that recognize the right of the woman at the procedure. One example is West Virginia’s 2015 law, which allows abortions up to 20 weeks.

State prosecutors have argued that the law has not been active for decades solely because prosecuting people for obtaining or performing abortions would have been illegal prior to the June 24 Supreme Court ruling overturning Roe v. Wade. If lawmakers had wanted to repeal the 1800s law, they would have, they argued.

In Louisiana, where an abortion clinic and others are challenging the state ban, District Judge Donald Johnson left a June 11 restraining order in place. He gave both sides until this morning to submit their “proposed factual and legal findings” in the case and gave no indication when he would finally rule.

Johnson debates whether to allow enforcement of the abortion ban that was drafted in anticipation of the U.S. Supreme Court’s June 24 ruling.

Regardless of Johnson’s decision, Louisiana Attorney General Jeff Landry said he anticipates the case will eventually end up in the Louisiana Supreme Court.

“We believe that at the end of the day we will prevail and the rule of law will be upheld,” Landry told a news conference, which was mostly drowned out by chants from nearby protesters, after Monday’s court hearing. “Those who don’t like it have two choices: they can try to change the law, but if they find themselves in the minority of ideas, then they can pack their bags and go somewhere else.”

In Indiana, a U.S. Supreme Court order moved the state one step closer to enforcing a parental notification law involving girls who have abortions before they turn 18.

The law has been stalled for five years, but the Supreme Court ordered lower courts to review the law after the landmark June 24 ruling. The order formally sent the Indiana case back to the lower courts which had declined to act pending judgment.

Abortion remains legal in Indiana until about 20 weeks.

In Louisiana, there is little doubt that an abortion ban will eventually be in effect in the state where the legislature has long been dominated by abortion opponents. The question as the trial progresses is when. The plaintiffs in the lawsuit are a northern Louisiana abortion clinic and other proponents of legal abortion. They managed to buy time for Louisiana’s three abortion clinics, in Shreveport, Baton Rouge and New Orleans, while claiming that the current law is unconstitutionally vague.

The plaintiffs say the law has multiple conflicting trigger mechanisms. They also argue that state law is unclear about whether it prohibits an abortion before a fertilized egg implants in the uterus.

Further, although the law provides an exception for “medically futile” pregnancies in cases of fetuses with life-threatening abnormalities, the plaintiffs argue that the criteria for what constitutes such a pregnancy are unclear.

It leaves doctors “paralyzed” trying to decide when an abortion would be legal, attorney Joanna Wright argued for the plaintiffs.

Landry’s office argues that the state ban is constitutional and should no longer be blocked. Landry, in a filing last week, argued that the law “must only delineate what is illegal – not define what is legal.” John Balhoff, a lawyer representing Landry, argued that the terms are clear and defined.

The trial began in New Orleans, where a judge issued a temporary order blocking enforcement of the ban on June 27. Nearly two weeks later, a second New Orleans judge sent the case back to Baton Rouge, saying state law required it to be heard in the capital. . This decision, in effect, terminated the original restraining order.

But Johnson issued a second temporary restraining order on July 11.

“We still get a lot of desperate phone calls from angry or sobbing women,” said Kathaleen Pittman, who runs an abortion clinic at Hope Medical Group in Shreveport, Louisiana. “They seem so down because they’ve tried to access care and at one point they’re available in a few weeks; the next minute they may never be available here again.”

“When we were granted the last [temporary restraining order] – I don’t know how to describe the staff except for the vertigo,” Pittman said. “The relief was palpable here.”

When the first restraining order expired, doctors at Pittman’s clinic continued to meet potential patients and offer counseling, ultrasounds and initial consultations. But patients were unable to access abortions while the courts considered the request to temporarily freeze the ban.

“Some of these women had been waiting for weeks or even months,” Pittman said.

Hope Medical Group had a waiting list of 300 to 500 patients even before the Supreme Court’s decision to overturn the federal protections guaranteed by Roe. Many patients who were scheduled for abortions soon after the Supreme Court ruling had their appointments canceled as the clinic halted the procedure for several days due to the state’s trigger law. Some were able to reschedule after the court blocked the trigger ban – but abortions stopped again when the first temporary restraining order expired.

Landry has sought to discourage patients from having abortions even when the state ban is blocked by the courts. When some clinics resumed services after the second restraining order took effect, Landry tweeted a “reminder.”

“Louisiana’s laws prohibiting abortion were not enforced,” he wrote. “Subject to certain exceptions, abortion remains a criminal offense in our state! Anyone who performs abortions, pending the outcome, will be guilty when the case is cleared in favor of the laws of our state.”

But legal experts say that criminal laws are generally not applied to actions that took place when those laws were blocked by the courts.

“Most people would tell you there’s a real retroactivity issue here,” said Elizabeth Sepper, a law professor at the University of Texas at Austin. “You cannot apply a criminal law that did not exist at the time to a supplier who was operating under a TRO [temporary restraining order] or prior injunction.”

Landry also criticized the court for temporarily blocking enforcement of state abortion laws that have been supported “at the polls and by their elected legislature over and over and over again.”

“Letting the judiciary create a legal circus is disappointing and discredits the institutions we rely on for a stable society,” Landry tweeted shortly after a judge granted the second temporary restraining order. “The rule of law must be respected, and I will not rest until it is. Unfortunately, we will have to wait a little longer for that to happen.”

The judge could decide later this week whether Louisiana’s trigger law that bans abortion will continue to be blocked while the case progresses through the courts. If the law is not blocked, all three abortion clinics in the state will have to close their doors to patients, Pittman said.

“We definitely need to have this preliminary injunction,” Pittman said.

Information for this article was provided by Kevin McGill and Mark Sherman of The Associated Press and Katie Shepard of The Washington Post.

FILE – An operating room technician performs an ultrasound on a patient at Hope Medical Group for Women in Shreveport, La., July 6, 2022. With abortion access wavering in Louisiana, the legal battle over the The statewide ban continues with a court hearing scheduled to begin Monday morning, July 18. (AP Photo/Ted Jackson, File) 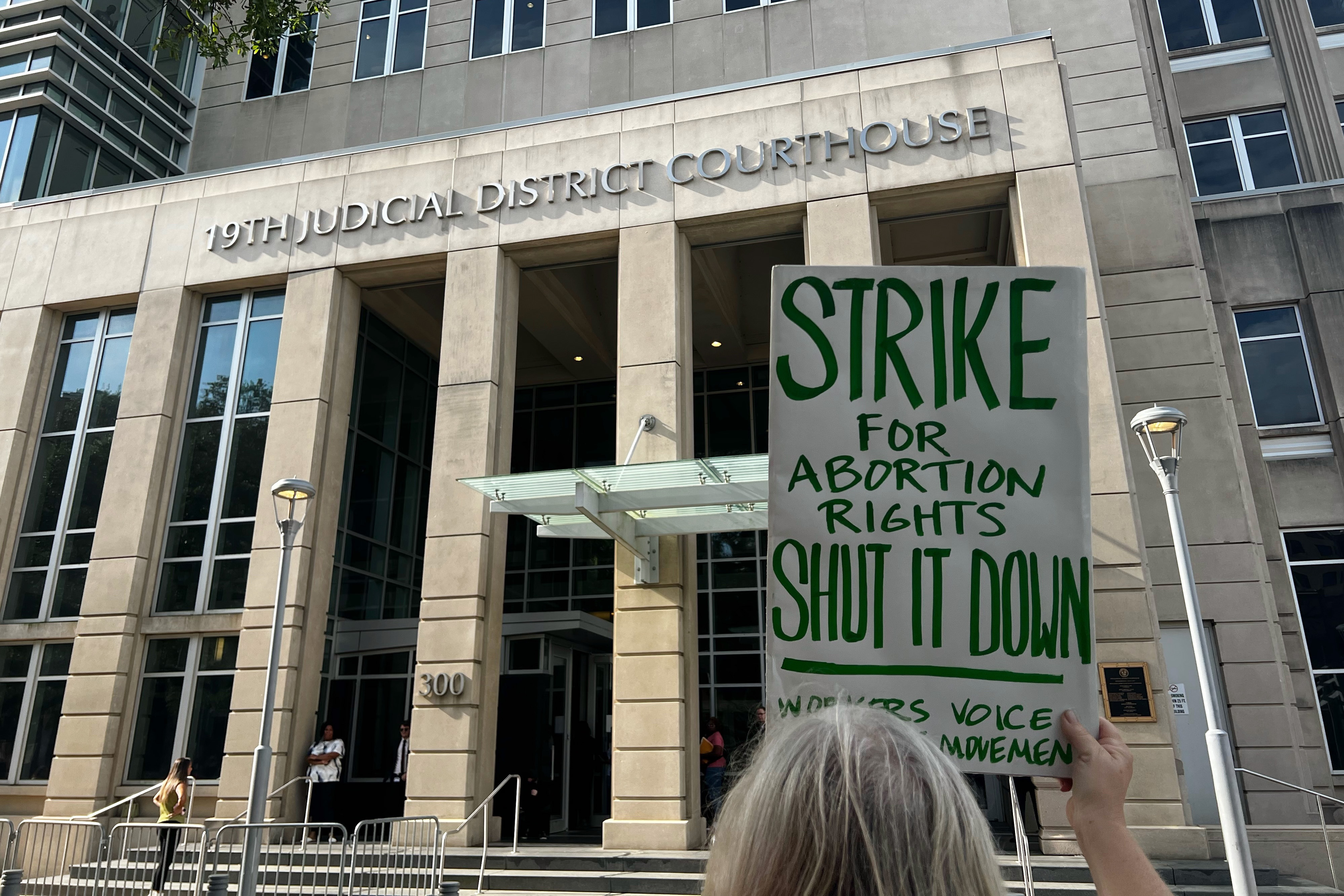 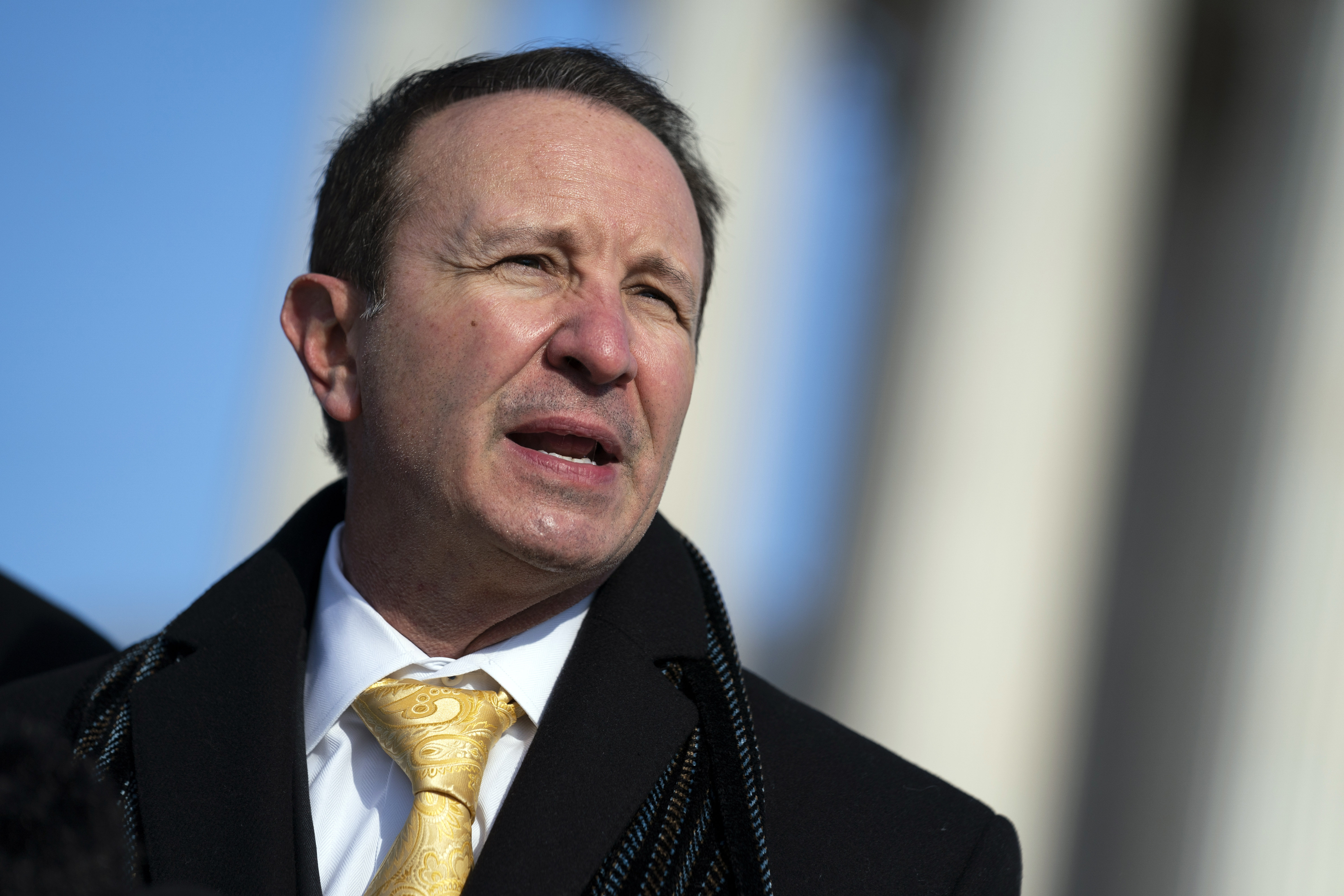 FILE – Louisiana Attorney General Jeff Landry speaks with reporters outside the Supreme Court on January 7, 2022 in Washington. As abortion access falters in Louisiana, the legal battle over the statewide ban continues with a court hearing scheduled for Monday morning, July 18. Landry’s office will argue that the state ban is constitutional and should no longer be blocked. (AP Photo/Evan Vucci, File) 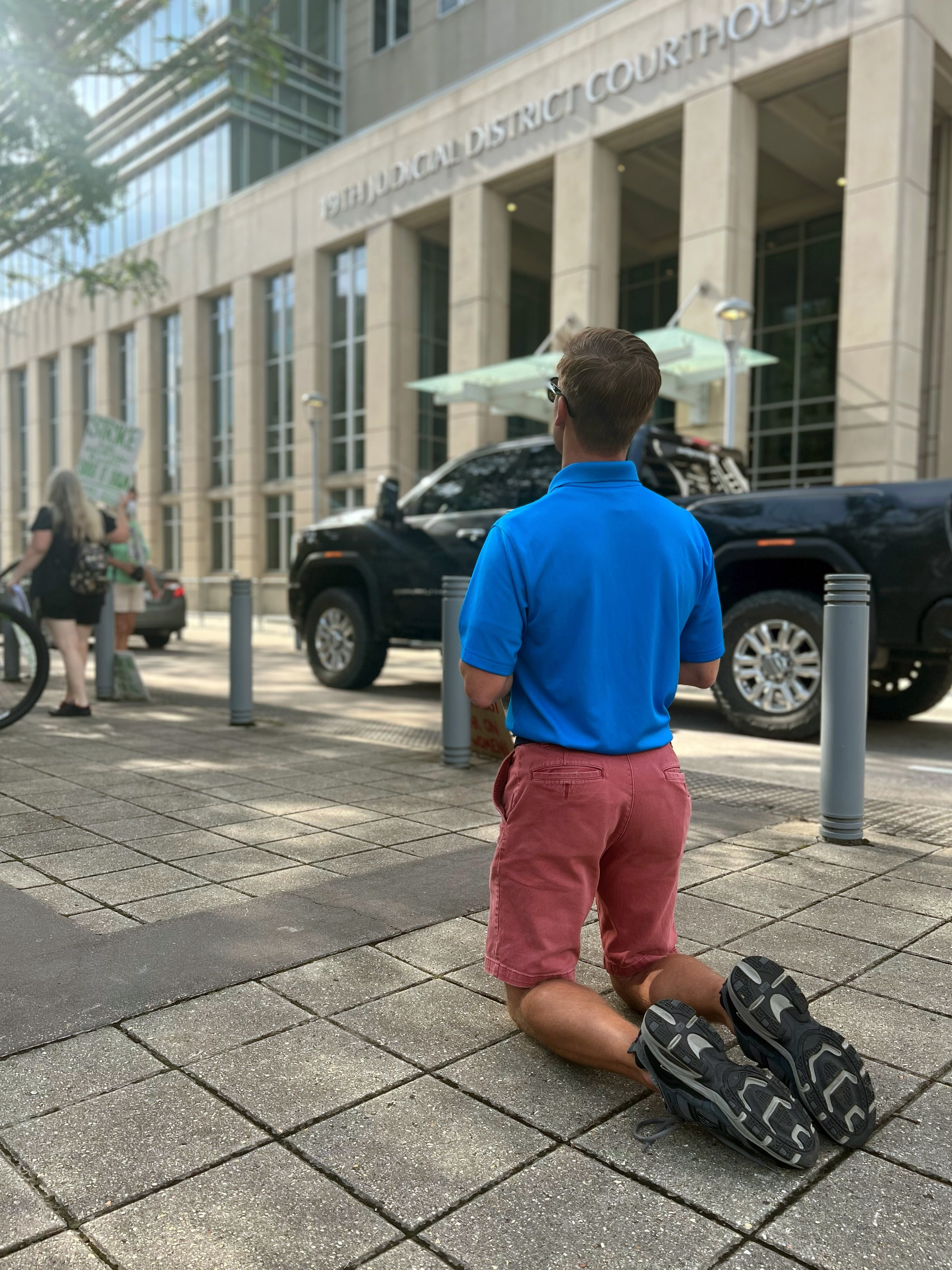