We were on our way to Somawathiya Chaitya. From Medirigiriya, we passed through Sungawila and took the road that was previously a bumpy, unpaved track that loosely connected a number of dilapidated bridges. This time, the road is carpeted and the bridges are new. The crossing of this section is conveniently smooth. We had planned to reach Somawathiya early in the day, but we were diverted by the various sites along the way and arrived in the late morning.

Known as a place of mysterious sites and miraculous rays of light, Somawathiya Chaitya lies 50 kilometers northeast of Polonnaruwa, in the jungles of Somawathiya Wildlife Sanctuary. Today it is considered part of the Wasgamuwa Strict Nature Reserve, the Mahaweli River Floodplains and the Trikonamadu Nature Reserve. 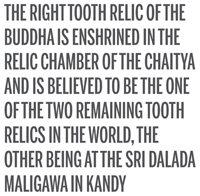 Somawathiya Strict Nature Reserve and Wildlife Sanctuary is under the Department of Wildlife Conservation. It covers 37,645.5 hectares and was first established as a wildlife sanctuary in 1966 and as a national park in 1986. It is one of four national parks belonging to the development project by Mahaweli.

It is home to a wide variety of animals, the most common being elephants. Somawathiya is famous for its herds of elephants. This is mainly due to the fact that the area consists of villu (swamp with aquatic and water tolerant plants) which elephants love to eat. Other species found here include the leopard, jackal, deer, sambar, and water buffalo.

Being in Somawathiya Wildlife Reserve, herds of elephants roam the surrounding wilderness of Somawathiya Chaitya, making it one of the best places to spot elephant herds. While we were there we saw herds of elephants grazing in the jungle near Chaitya and also a lone elephant standing by the electric fence, perhaps begging the pilgrims for food. However, the premises of Chaitya are covered with an electric fence preventing wild elephants from entering the sacred area.

It is believed that a Prince Giri Aba who was married to Princess Somawathi, the sister of King Kavantissa of Ruhuna, built the Somawathiya Chaitya in the 2nd century AD. They lived and ruled an area called Somapura which was on the bed of the Mahaweli River. The Somawathiya Chaitya was built at the request of the princess who wanted a temple to perform religious activities.

The relic of the Buddha’s right tooth is enshrined in the chamber of relics at Chaitya and is believed to be one of the two tooth relics remaining in the world, the other being at Sri Dalada Maligawa in Kandy.

The Somawathiya Chaitya was maintained by several kings who succeeded Prince Aba, but it was later abandoned during foreign invasions. It was discovered again in the 1940s. Archaeologists began excavating the site in 1964. They unearthed numerous ruins, including stone inscriptions, moonstones, and flower bases. 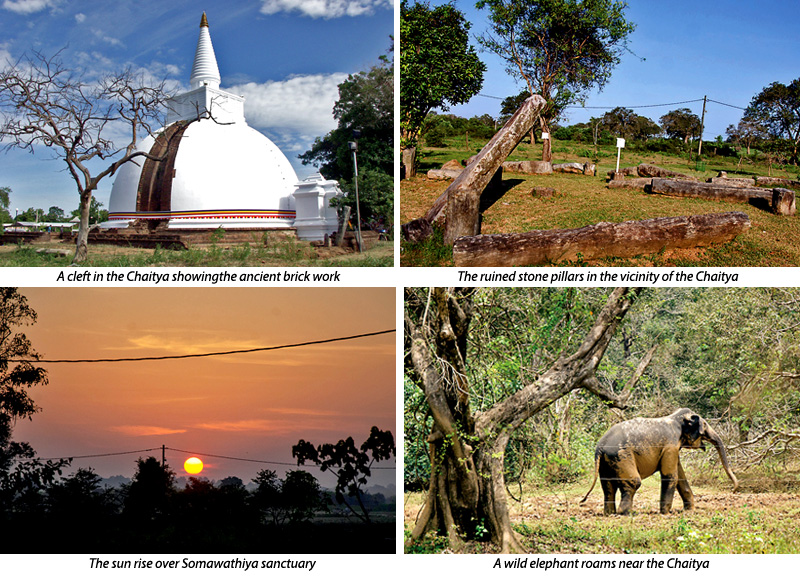 In 1987, the Somawathiya region was the target of terrorist attacks. A massacre has taken place in a nearby village. The temple guardian was also killed in the attack. Bhikkhus and civilians residing in the area fled to safety after neighboring Seruwila Raja Maha Vihara was attacked by the LTTE, killing people.

The area was largely abandoned for the next 15 years until the temple was renovated in 2002 in a ceasefire with the LTTE and reopened to the public. Today it is regularly visited by pilgrims and has also become a tourist attraction.

Historical records indicate that the Somawathiya Chaitya was located on the eastern bank of the Mahaweli River. However, it is now close to the west bank of the river. There was speculation whether this was the same temple mentioned in ancient chronicles. This was later resolved when it was discovered that over the years the river had gradually changed course. It is believed that the road to the temple was the original course of the river.

The Eric Swan rock is near the entrance to the temple. It is so named because a person called Eric Swan, a photographer who shot the reclining Buddha statue carved in a rock was killed on this rock by a wild elephant which was stirred by the sound of the gunshot.

We couldn’t see the rock, but heard the story of a temple keeper.

It has been alleged on several occasions that beams of light (Budu Res or Buddha rays) radiate from the Chaitya, the most recent being during a former president’s visit to Somawathiya Chaitya in January 2012.

This kind of phenomenon was first reported in 1977 and then in 1981, 2002 and 2006. Although there are eyewitnesses and photographs of this, it remains an unexplained phenomenon.

Whether or not you are a believer in such phenomena, Somawathiya is a region to visit if you are a history and archeology enthusiast or wildlife enthusiast or both, like us. If you are visiting early in the morning, you may have the added benefit of watching the sun rise over the Chaitya.